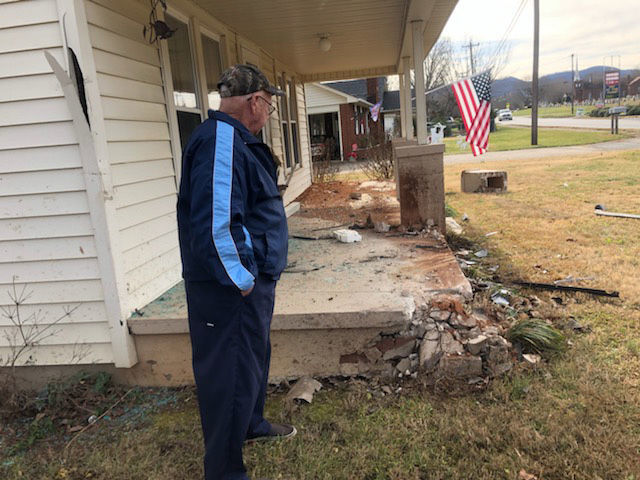 Owen McCoy looks at the damage done to his house after a car crashed into it Tuesday night. 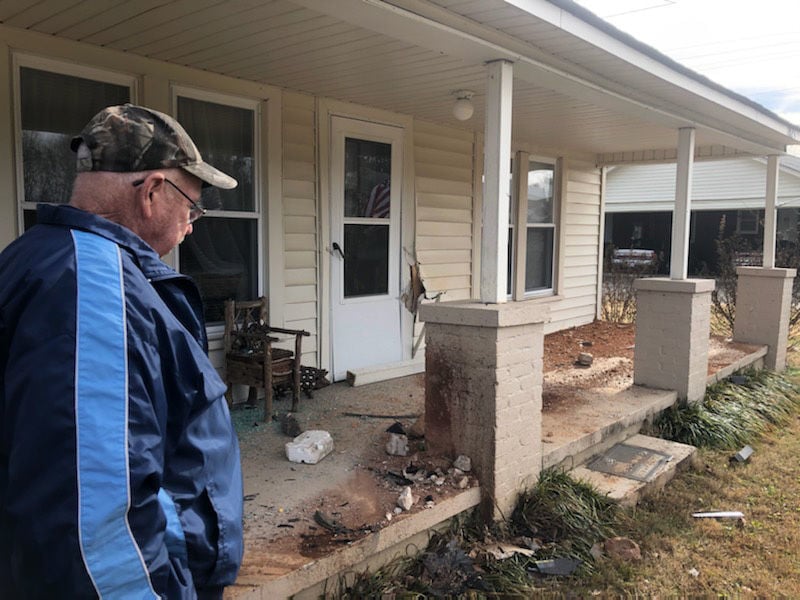 Dirt and glass are strewn across the porch of Owen McCoy's house.

Owen McCoy looks at the damage done to his house after a car crashed into it Tuesday night.

Dirt and glass are strewn across the porch of Owen McCoy's house.

Owen McCoy was watching the news in the comfort of his living room Tuesday night when something that sounded like a gunshot had him getting off his couch and heading outside to investigate.

Unbeknownst to him, two teenagers had fled a public safety officer who attempted to stop them for a fictitious registration plate on Burkemont Avenue, according to a press release from the Morganton Department of Public Safety.

The chase led them to Salem Road, and with the road slick from rain and the vehicle accelerating, the car slid off the road and hit McCoy’s house, the release said.

Austin Frisbee, 18, of 3233 Clark Loop Lot 9 in Morganton, was driving the car and was pinned in for a short time after the crash, the release said. Salem Fire Department had to free Frisbee from the vehicle, the release said.

Frisbee’s passenger, Jadayn Moorefield, 19, of 3772 South Park Drive in Morganton, was able to get out of the car.

Both Moorefield and Frisbee were transported to Carolinas HealthCare System Blue Ridge-Morganton, but were later released without serious injuries, the release said.

A search of the car and Moorefield turned up methamphetamine and drug paraphernalia, according to the release.

McCoy said that while this wasn’t the first time he has seen people wreck coming through the curve in front of his house, he felt lucky this time.

“We were lucky, really,” McCoy said. “He must’ve been flying though. If he had come (closer to the house) ... he would have been in there with us. It might have killed us.”

His house sustained some damage, including a column and banister on his porch getting destroyed, some damage to the front of his house that knocked his front door in about three inches.

One of McCoy’s neighbors, Rodney Clark, spent Wednesday morning replacing his mailbox that was torn down in the crash.

Moorefield was charged with felony possession of schedule I controlled substance, methamphetamine and possession of drug paraphernalia, the release said. Her bond was set at $3,000 secured with a court date set for Friday.

The North Carolina State Highway Patrol investigated the crash, according to the release.