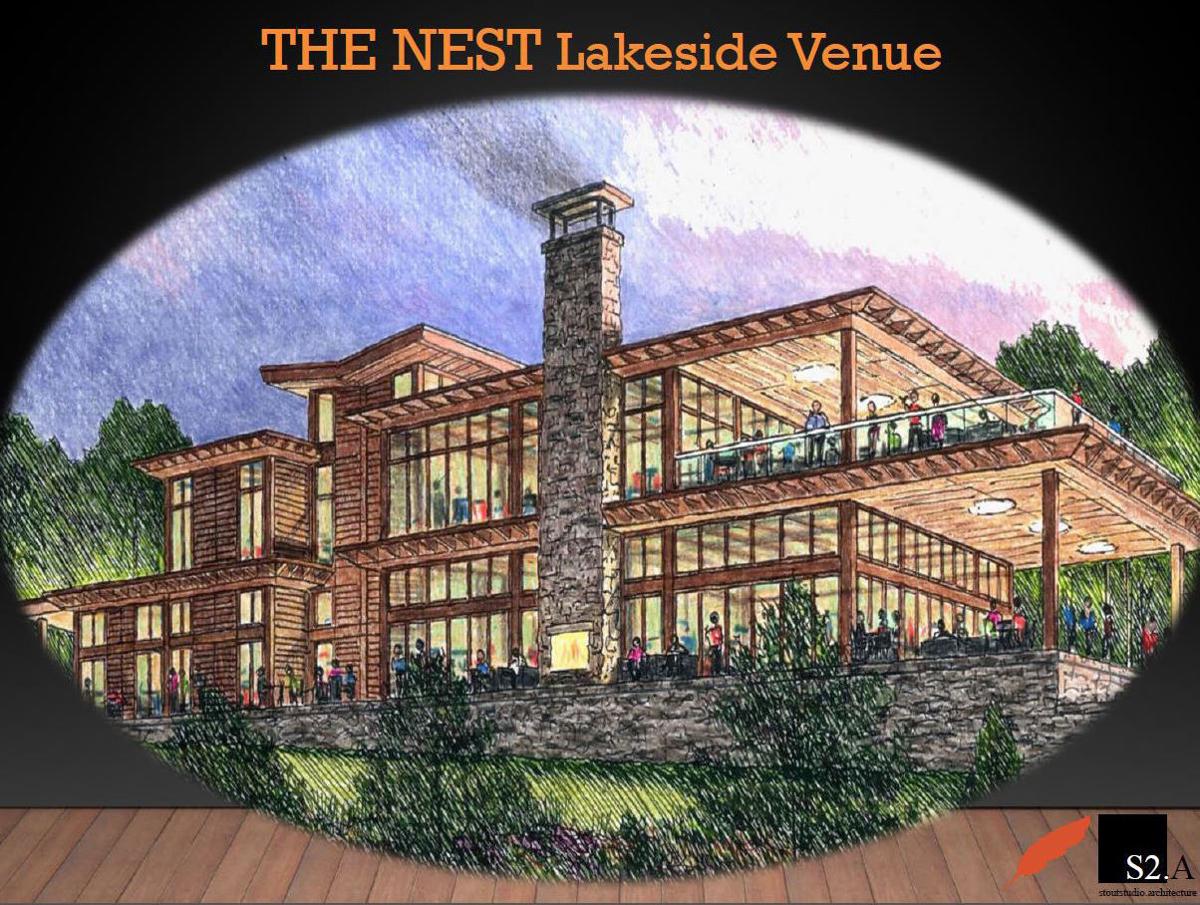 This is an architectural rendering of a proposed wedding/conference venue that would be built on county park property at Lake James. 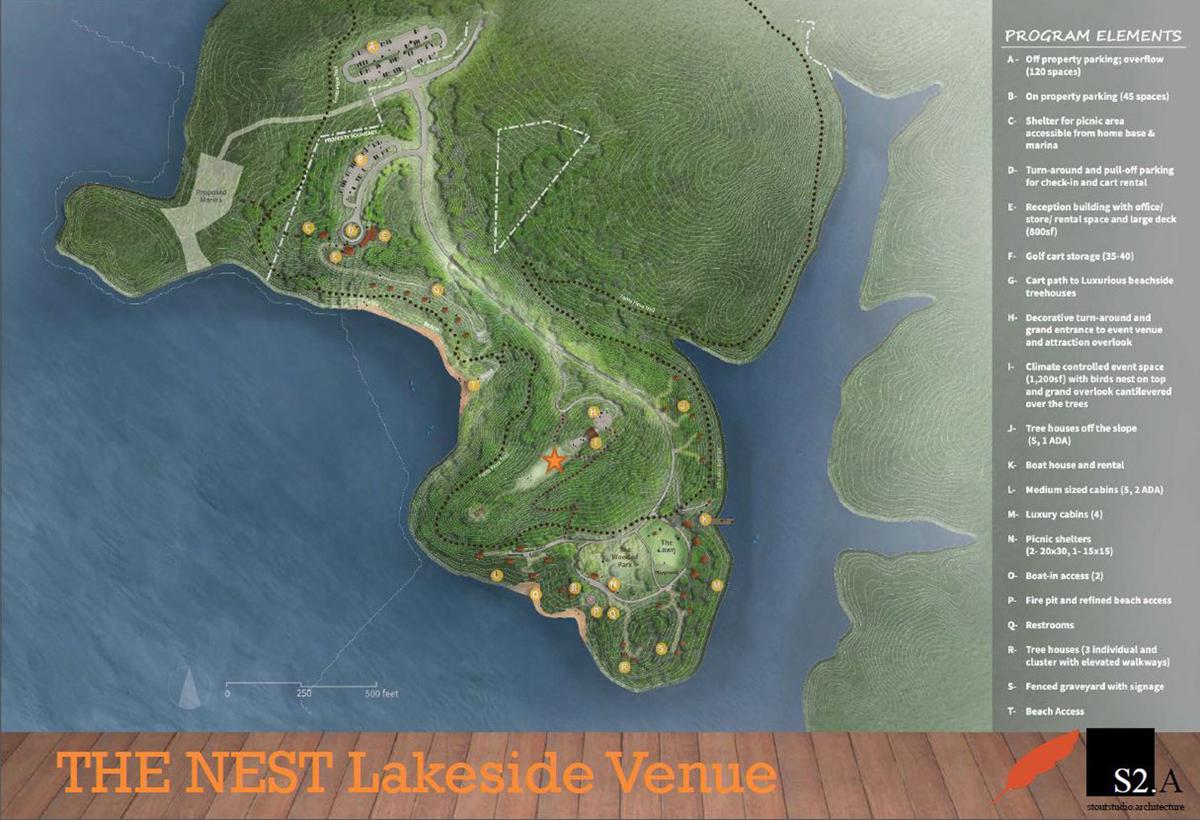 This map shows the proposed layout of a development on county property at Lake James. The anchors of the development would be a wedding/conference venue and a marina.

This is an architectural rendering of a proposed wedding/conference venue that would be built on county park property at Lake James.

This map shows the proposed layout of a development on county property at Lake James. The anchors of the development would be a wedding/conference venue and a marina.

Some private investors are hoping to bring some “glamping” opportunities to the wilderness of Burke County.

In addition to the glamping, they also are proposing a wedding/conference venue overlooking Lake James.

On Wednesday, the proposal was presented to the Burke County Board of Commissioners because the project is slated as a private/public partnership on county parkland. The investors/developers are asking the commissioners to provide some infrastructure for the project.

Commissioners didn’t make any decisions on the project during Wednesday’s meeting but asked for more information.

Isaac Hoff is one of the developers and he, along with Burke County Community Development Director Scott Carpenter, laid out the project proposal for commissioners.

Carpenter said his department has been looking for a private partner to do a yurt or treehouse village on county land near the lake. The village, along with the wedding/conference venue, would be near Fonta Flora trailhead. The trail is about 20 miles, currently, Carpenter said. The plan calls for a 29-mile loop around Lake James and it will eventually connect downtown Morganton to downtown Asheville.

Carpenter told commissioners the wedding/conference venue and village would be done in two phases, with a total investment of about $10 million. The first phase would be what he is referring to as The Nest Lakeside Venue, which is a multi-level facility that would host weddings, conferences, retreats, music and art festivals and family gatherings, he said. The venue would be big enough to host a wedding with 200 to 300 guests and could compete with larger areas such as Atlanta, Charlotte, Raleigh and Asheville. What Carpenter calls The Eagle’s Nest platform also would be built and would give 360-degree views of the area but would be separate from the venue so it could still be accessed while events are taking place.

The wedding/conference venue would cost an estimated $4.5 million, Carpenter said. The venue would be made mostly of glass with the main level holding a commercial kitchen, demonstration kitchen, bridal room, banquet area, covered porch and covered drop-off area. Plans also show a large outside fireplace and bar. The second level would have a rooftop deck, with what developers call a “spectacular view,” bar and seating areas.

The investors, which include George Milner, have enthusiasm, financial backing and passion to make it a world-class destination, Carpenter said.

The concept for the rest of the development, which would be in phase 2, calls for a marina, seven luxurious beachside treehouses, five other treehouses on a slope, with one meeting ADA requirements, five medium-sized cabins (two ADA) and four luxury cabins. There would be picnic shelters, a fire pit, restrooms and other amenities.

Carpenter said the investors/developers are asking the county for a 30-year lease on the property with four five-year options to renew, 25-plus acres that will be needed for the septic system, and a tax reduction of 50 percent incentive for eight years. The county would benefit by receiving tax revenues from the improvements, which he estimates being around $21,000 a year.

Carpenter said the investors/developers are also asking the county to provide road access down Eagle’s Nest Way, between N.C. 126 and Venue Drive, which is already in place because Duke Energy already built the road, and to provide power down the road, which also is already in place, he said. The group also is asking for a 180-space parking lot along Eagle’s Nest Way, he said. Carpenter said the parking lot also could be used as a Fonta Flora trailhead. The developers also are asking the county to build a 1,500-foot drive to the venue off Eagle’s Nest Way and 25 acres for the venue, he said.

Carpenter said the county could expect at least 12,000 clients annually, with 70 percent coming from outside the county, and spend $100 to $150 a day, which could mean up to $12.5 million. It would build the Fonta Flora brand and bring more people to the county, he said.

Carpenter said there is no other property on Lake James where this kind of development could be repeated. The other land is tied up in state and federal land, or it’s conserved or already built upon, he said. He believes this would be an economic development engine for Burke County.

After the presentation, commissioners agreed they weren’t ready to vote on a proposed letter of intent between the two parties. A letter of intent would not be binding on the county, said J.R. Simpson, county attorney.

Burke County Manager Bryan Steen said a draft of a letter of intent could be ready for the February commissioners meeting.

Didn't AOC show us that these incentives are a public boondoggle and a waste of public tax money.? Like Apple let these developers fund their own land, roads, electrical power. These are priceless lands, the developers should pay.

Seriously - HOW does this concept REALLY help with the PRAGMATIC NEEDS of Burke County ? The 84 +- INDUSTRIAL PARK at Kathy Road is still barren after more than a decade. No new industries are chomping at the bit to move into Burke Co. Who really plans to walk to Asheville NC fromLake James ?? Scott Carpenter continues to push every concept that is totally unpragmatic in the best interest of the welfare of the citizens of Burke County . Burke County has far too many essential needs to continue to 'fluff' an image of being progressive. I speak from experience.

Another Venture like the Beanstalk Zip line $77 for Zip, Climb, Jump.. per person.. way out of most Burke Citizens price range.. Like in the previous comments.. Just whom will the Tree house at Lake James Benefit... Not the 90% of Tax Payers.. and the Walking Trail, there was a meeting just last week about trying to take peoples property along the rivers to add to this trail.. Citizens in the County give a little and the County seems to try and Take a lot More.. Every Time there's a New so Called Project the Taxes Seem to Rise, Up Up and Away