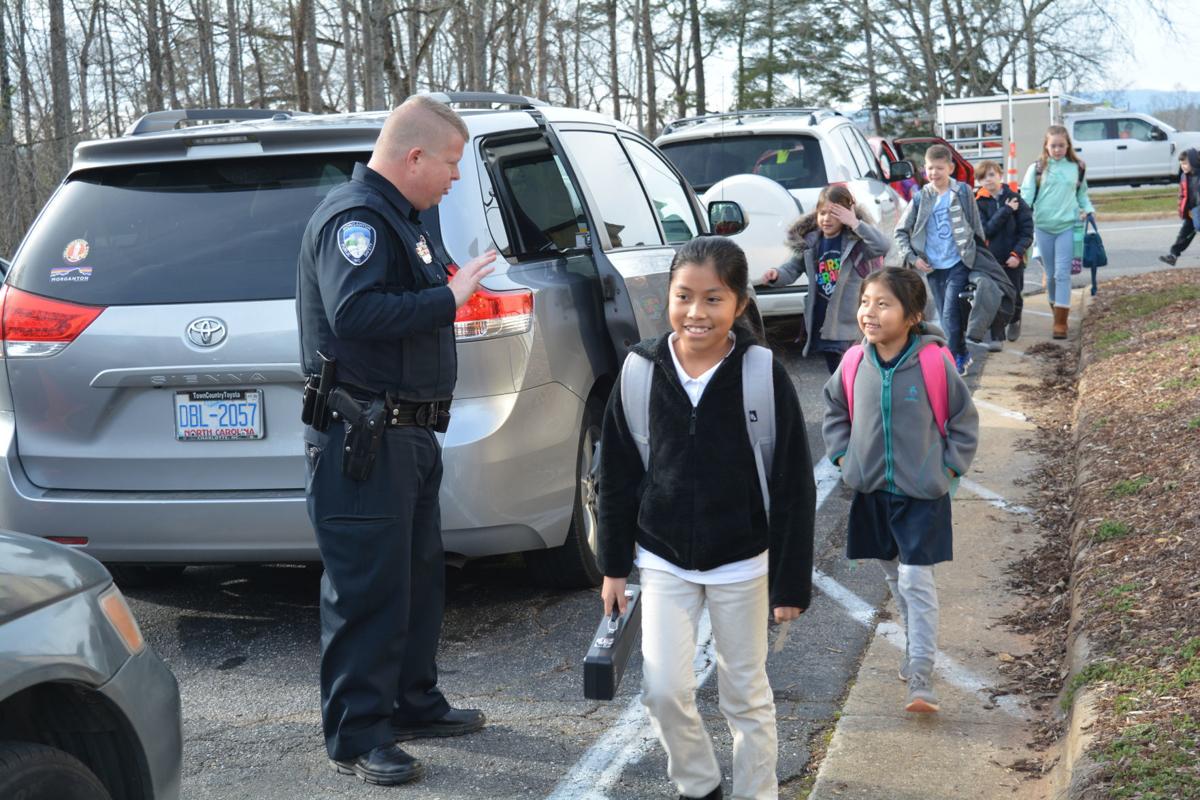 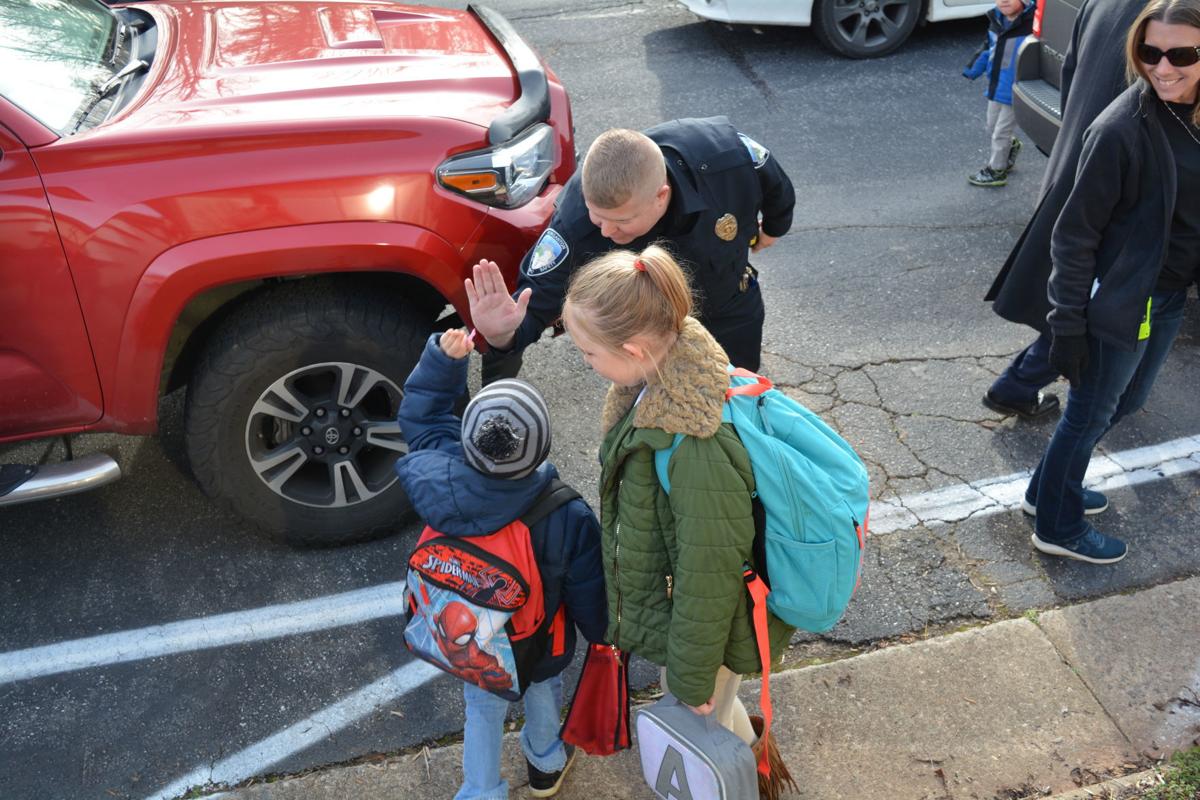 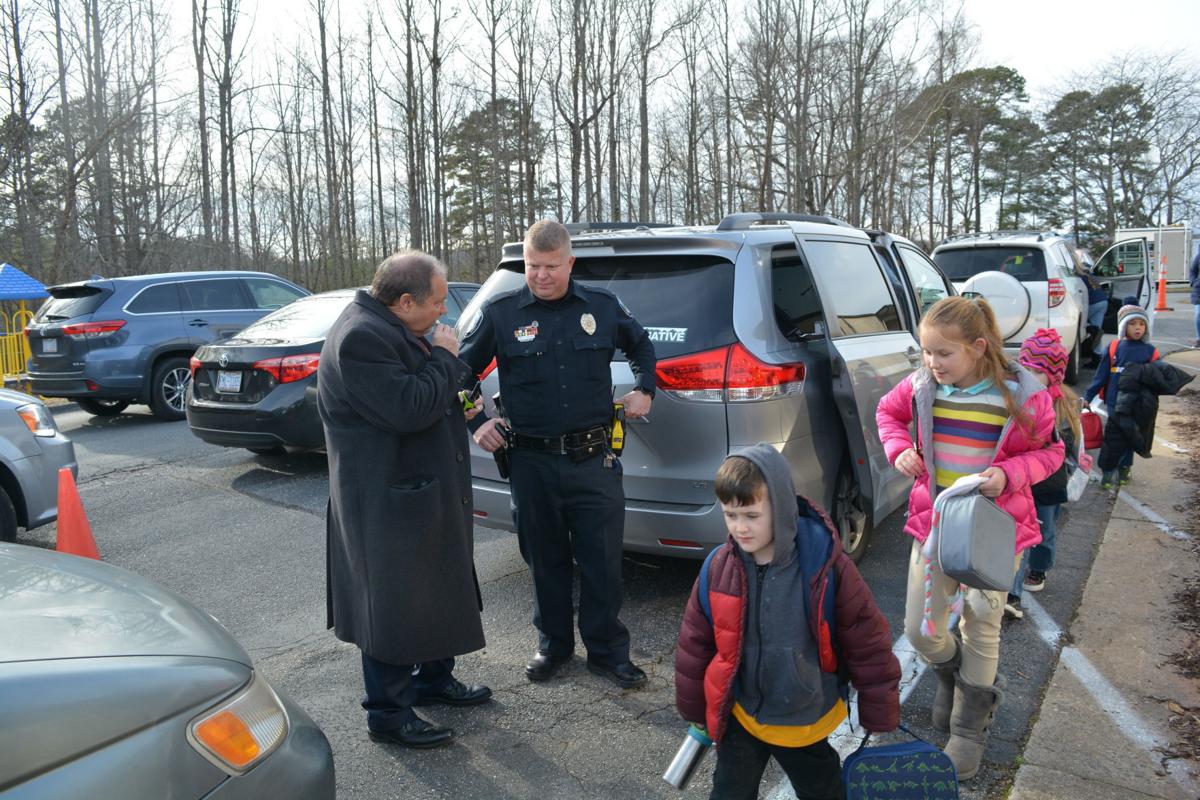 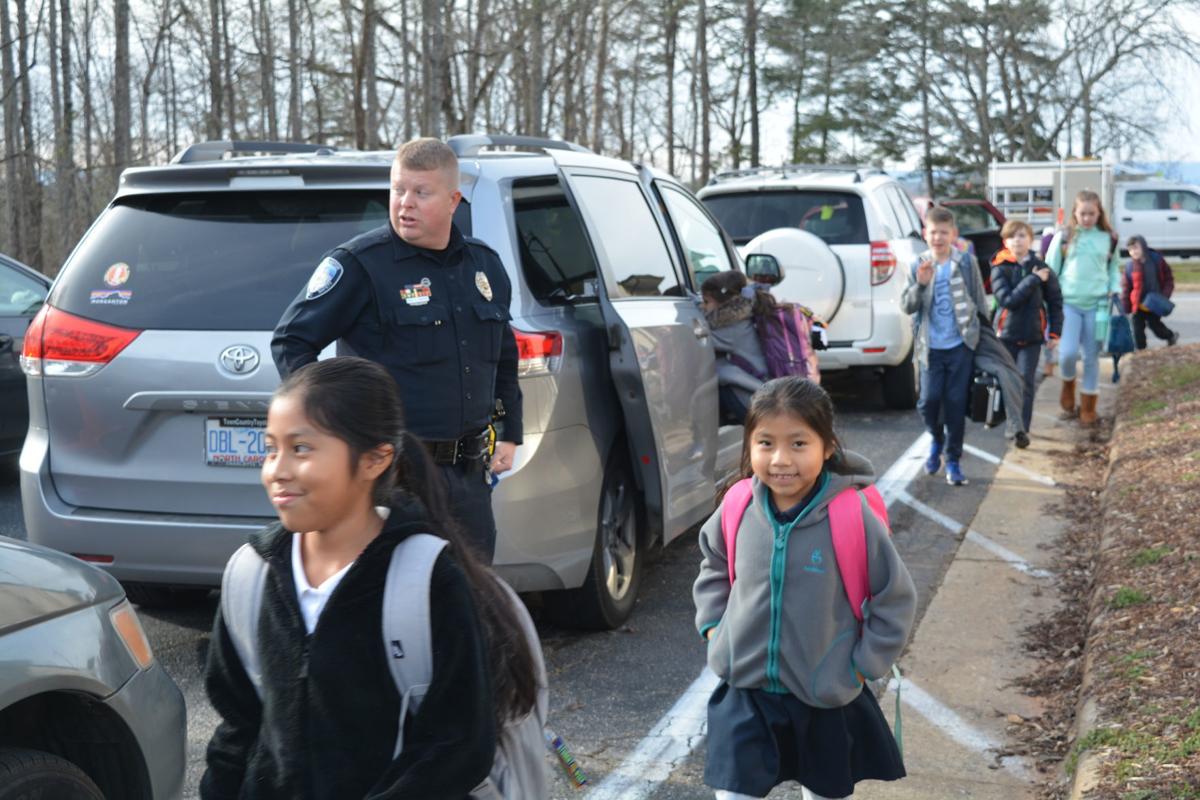 Students bid adieu to PSO Kinard before climbing into their rides Wednesday. 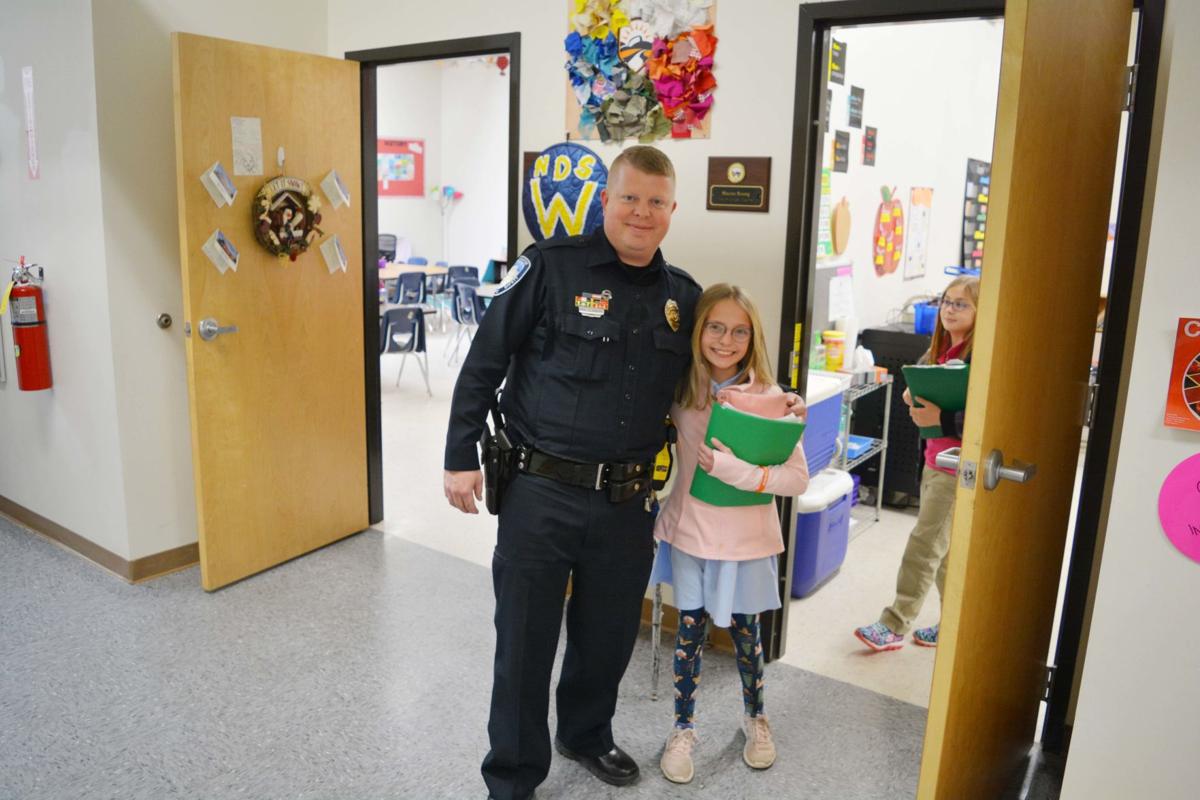 Though PSO Kinard is in only his first full week as school resource officer at New Dimensions, he has made friends with students throughout the school. 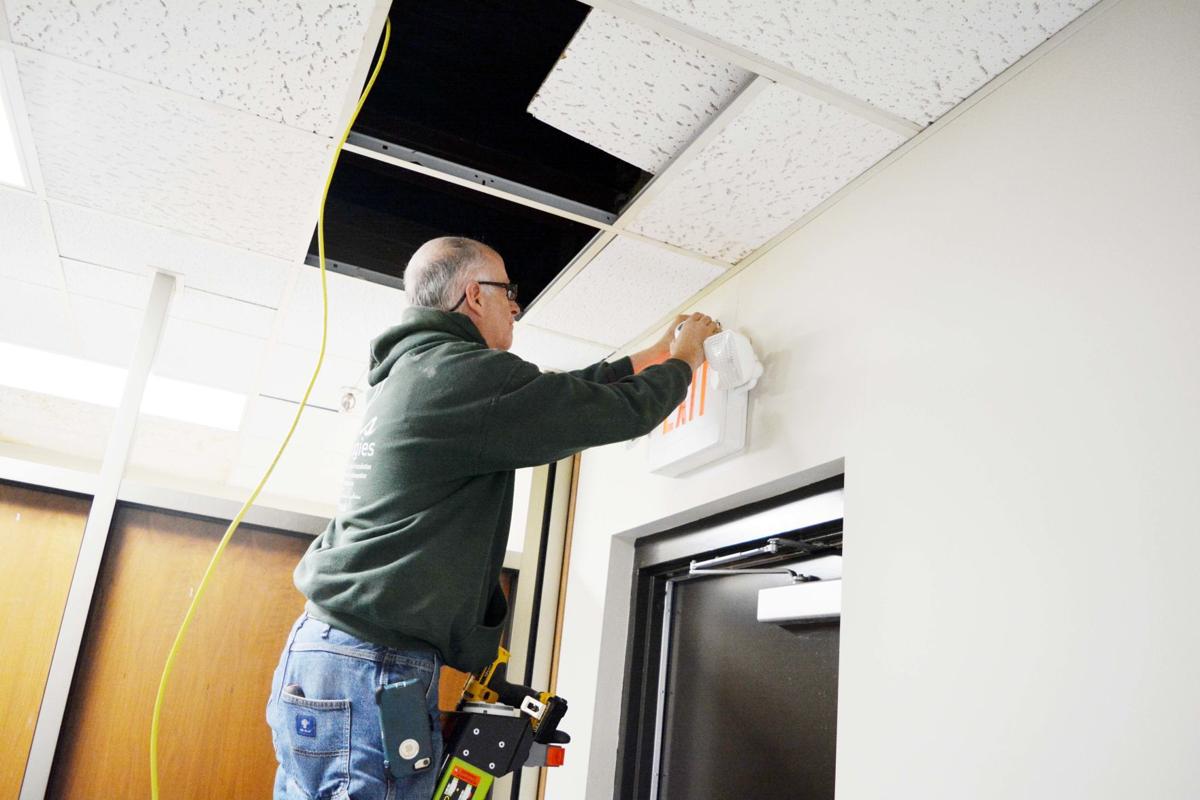 Students bid adieu to PSO Kinard before climbing into their rides Wednesday.

Though PSO Kinard is in only his first full week as school resource officer at New Dimensions, he has made friends with students throughout the school.

New Dimensions School is in the process of bolstering its staff, security and student resources as the school is installing surveillance cameras, providing crisis counseling for its students and recently hired Public Safety Officer Casey Kinard as its first school resource officer.

New Dimensions is a K-8 charter school with 336 total students. Funding for the new resources is a result of the North Carolina Department of Public Instruction’s School Safety Grants Program. The total grant was roughly $87,500, according to NDS Director David Burleson.

Burleson said he was notified that the school would receive the grant right before the holidays.

“The first call I made (after finding out about receiving the grant) was to (PSO) Casey (Kinard),” he said. “I said, ‘Casey, we got our grant.’ The second call was to (MDPS) Chief (Ronnie) Rector, and I told him we got the grant. He’s still an employee of the city of Morganton through MDPS, and we contract with them.

“Our hope and prayer is they would send Casey here because of his knowledge of the school. He’s been teaching D.A.R.E. here for two years. So, he knows the students, he knows the staff and he’s a well-respected man among the staff.”

Burleson said Kinard will spend 20-25 hours per week working at the school.

“His role here is multifaceted,” Burleson said. “He’s here to make sure the school is as safe as it can be. He’s here to let students see law enforcement in a positive light. He’s a resource to the teachers — he will go in and do individual class lessons. If a student just needs a pat on the back and have someone to talk to, he can also do that, too.”

Kinard works as a Drug Abuse Resistance Education teacher for New Dimensions. For Kinard, the opportunity to work with New Dimensions students is beneficial to him and the students, he said.

“To me, the biggest thing is being a role model and building a positive relationship with the kids,” Kinard said. “They need to see law enforcement — somebody in uniform during a good time. A lot of kids don’t get to see law enforcement unless it’s a bad day. I get to see these kids every day on a good outlook. I go into lunch and sit down with them at lunch and hang out with them. I get to talk to them in the hallways. We get to build that relationship on a positive note.”

Burleson said that Kinard is even able to offer advice to New Dimensions regarding the installation of the camera system.

“We’re putting the camera system in and he’s been an integral part in looking at campus (and deciding the best places for the cameras),” he said. “He’s been reviewing the campus with our contractors and he’s able to say, ‘Based on my experience, I think we need cameras here, or we need a visual in this area.’ So, he’s been able to provide that for us.”

New Dimensions is at 550 Lenoir Road in the building that the former Shadowline’s manufacturing plant occupied until 2011. In all, the building’s transformation from a factory into a school can present difficulties when installing surveillance equipment, Kinard said.

“It’s not your typical school where there are two long hallways,” Kinard said. “This was a commercial building and a factory. So to properly install cameras in one hallway, you have to put a camera on one end and then the other end. Then, in the middle you have two hallways that come across, so you have to have a camera in both of those hallways going both ways.”

In all, NDS is planning to add 41 security cameras throughout the campus. Kinard will be able to view all of the cameras’ feed through his computer in his office.

Burleson has a long track record working in multiple positions throughout local schools — from principal of Freedom High to Burke County Public Schools’ superintendent. While Burleson admitted NDS “has a very safe campus,” he recognizes that school safety is always a priority.

“There’s no school that is totally safe,” he said. “The more we can do to make this school campus as safe as possible we’re going to do it. I was the high school principal at Freedom for a long time. I never imagined needing cameras.”

Still, Burleson said he feels the presence of Kinard will help even more than security cameras potentially could.

“The most important deterrent that helps with the school’s safety is the (school) resource officer,” he said. “It doesn’t matter the size of the school — having the resource officer there boosts the safety tremendously.”

NDS also has contracted A Caring Alternative — a comprehensive care agency providing behavioral health and substance use disorder services to adults, adolescents and children in western North Carolina, its website said — to perform its counseling services, or what he said the school calls “school intervention.”

“(Students will be able to take advantage of) crisis counseling for traumatic situations,” Burleson said. “(Examples of this include) if a student experiences something that happens in their family, such as a death in the family, or a student has had something dramatic occur in their life, like the family has recently moved and they’ve been having a hard time transitioning.”

According to Burleson, Kinard will serve as a student ally and another person to aid with student intervention.

“There are several ways to (explain Kinard’s) influence,” he said. “The more positive influences we can have for children, the more resources we can put in here, the better. I watch him in the hallways with kids who he hasn’t even taught in D.A.R.E., and they’re high-fiving him.

“Secondly, it’s comforting to know that I have someone here. If an issue occurs, he has resources and he has a radio. He can get backup (help) here a whole lot quicker than if I were to call 911. So, he’s a huge resource, he’s a support. More than anything, he’s a good guy. If you have good people around you, your school’s going to be better.”

“The safety of the school is No. 1,” Kinard said. “But a close No. 2 is building those relationships with the kids.”