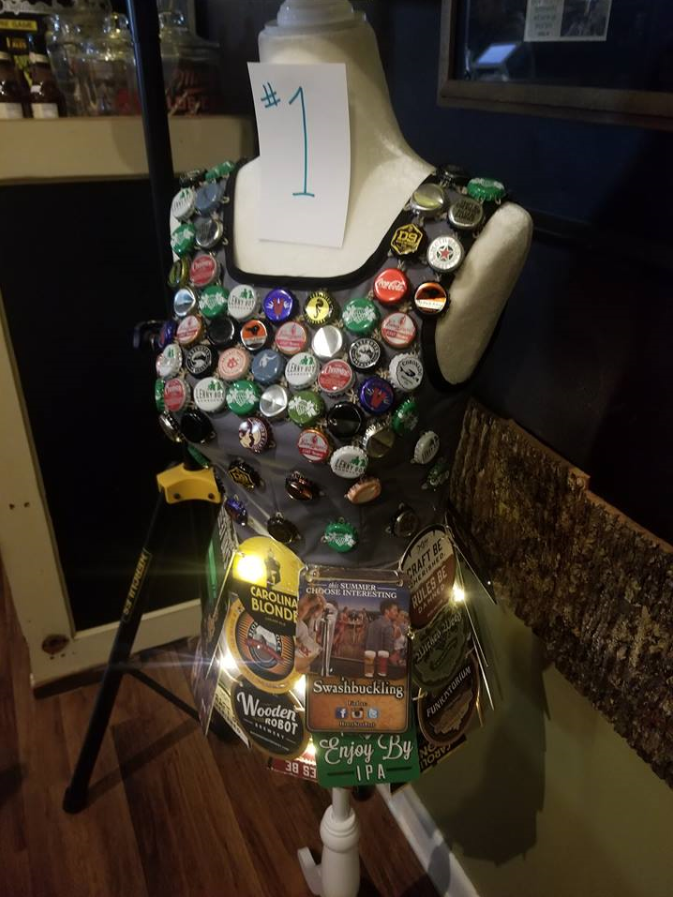 Pictured is a garment made from coasters and bottle caps for a previous contest. 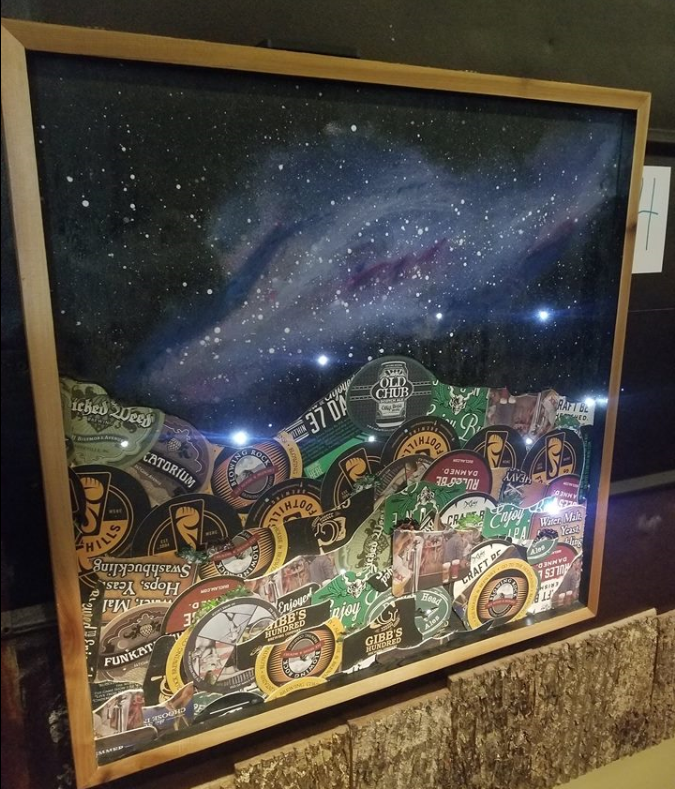 Pictured is a previous contest entry.

Pictured is a garment made from coasters and bottle caps for a previous contest.

Pictured is a previous contest entry.

Brown Mountain Bottleworks of Morganton is offering community members an opportunity to express themselves creatively for a good cause.

Keith Suttles, the bar’s manager, came up with the idea for the annual contest, in which people use coasters and bottle caps to create works of art.

“Being a bottle shop, we always have tons of bottle caps from where people buy beers and soft drinks, and then the beer companies give us coasters, so we always have tons of those things,” Suttles said. “About three years ago, I thought, instead of throwing them away, we would start having an art contest to see who could make something out of 50 coasters and 25 bottle caps. We decided that, if people would agree to it, we would do a silent auction, and all of the proceeds for the artwork would go to Southmountain Children and Family Services.”

He explained why they felt it was important to support the agency.

“We know some of the employees (at Southmountain CFS),” Suttles said. “My wife used to be a teacher at Glen Alpine Elementary School, where a lot of those kids went to school. It’s a personal connection we have to that organization since we’ve been in the Morganton area.”

Last year, the company raised more than $500 for Southmountain CFS through the contest.

The caps and coasters feature the logos of various beer and soft drink brands. Those who would like to enter the contest must stop at the bar to pick up a kit consisting of 50 coasters and 25 bottle caps, which they must turn into a work of art. The kit is free. Entrants will donate the artwork back to Brown Mountain Bottleworks for the company to auction off.

“We have a set of rules, but you can do anything you want with the caps and coasters,” Suttles said. “You can break them back down into paper. You can hammer them out flat. You can add any other —media you want — pottery, paint, wood — it doesn’t make any difference — but you have to use all 50 coasters and all 25 bottle caps.”

Each piece of art must reflect the theme of the Catawba River.

“The first year, we didn’t have a subject, so we saw stuff all over the board,” Suttles said. “Then we decided we would pick out a local landmark and make that the subject. The Catawba River could be a variety of things. It could be birds, or fish or something related to water.”

Contestants may pick up additional caps and coasters beyond their initial kits if necessary, while supplies last.

Anyone in the community is invited to enter the contest, which has three different categories of competition: individuals ages 21 and older, individuals under 21 years old and a corporate/business/group category.

Suttles described the vast array of creativity he has seen in previous entries.

“We’ve seen dresses made out of the caps and coasters,” Suttles said. “We’ve seen chandeliers, tables, dioramas and a miniature roller coaster. One guy built a mechanical toy bird — its wings were spring-loaded, and as it came down a pole, it flapped its wings.”

He said the chandelier, created by Ray Sweany and Mark Joubert of Morganton, was the winning entry the first year of the contest.

“The chandelier was made out of caps, coasters and mirrors, and they added lights and a thing to make it rotate,” Suttles said.

Entries are due back at the bar by 10 a.m. on Saturday, Nov. 24. The pieces will be put on display. The silent auction will begin when the bar opens at 11 a.m. and will end at 7 p.m. The community is invited to view the artwork and make bids throughout the day.

Employees of Brown Mountain Bottleworks will judge the entries and determine the winners.

“We’ll have a little input from the crowd,” Suttles said. “We kind of poll people during the day as they’re looking and ask them which ones they think are the best.”

After the judging, prizes will be awarded. The corporate group will receive first- , second- and third-place trophies. The under-21 group will be awarded a company T-shirt for first place, a hat for second place and a mixed six-pack of soda for third place. The over-21 group prizes are as follows:

“People that buy into the club have a mug that’s made by West Union Art Studios,” he said. “It’s a handmade pottery mug with the Brown Mountain Bottleworks logo, and they can leave it here. There are prizes that come with that membership.”

He encouraged people to enter the contest, even if they feel like they don’t have significant artistic talent.

“You never know what might win, and it’s for a good cause,” Suttles said. “If it sells for 10 bucks, that 10 bucks that Southmountain Children and Family Services didn’t have before. Some of the people that entered (previous contests) didn’t think they were very artistic, and (their entries) were some of the favorite ones that people coming into the shop liked the best. You just never know.”

For more information on the contest, contact Brown Mountain Bottleworks at 828-367-0395. The bar is located at 115 E. Union St. in Morganton.

Staff writer Tammie Gercken can be reached at tgercken@morganton.com.

AN AFFORDABLE TREE SERVICE AND LANDSCAPING