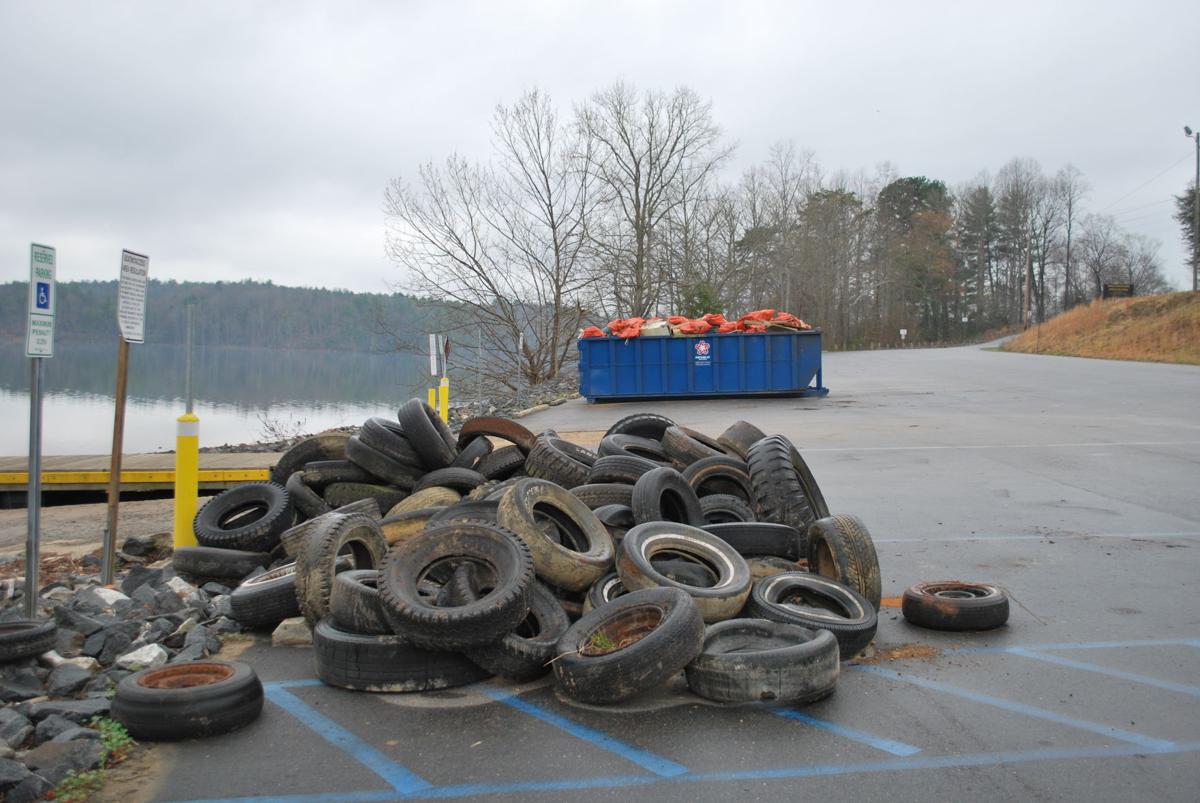 Pictured in the foreground is a pile of tires collected from Lake James and the surrounding area during a previous cleanup. 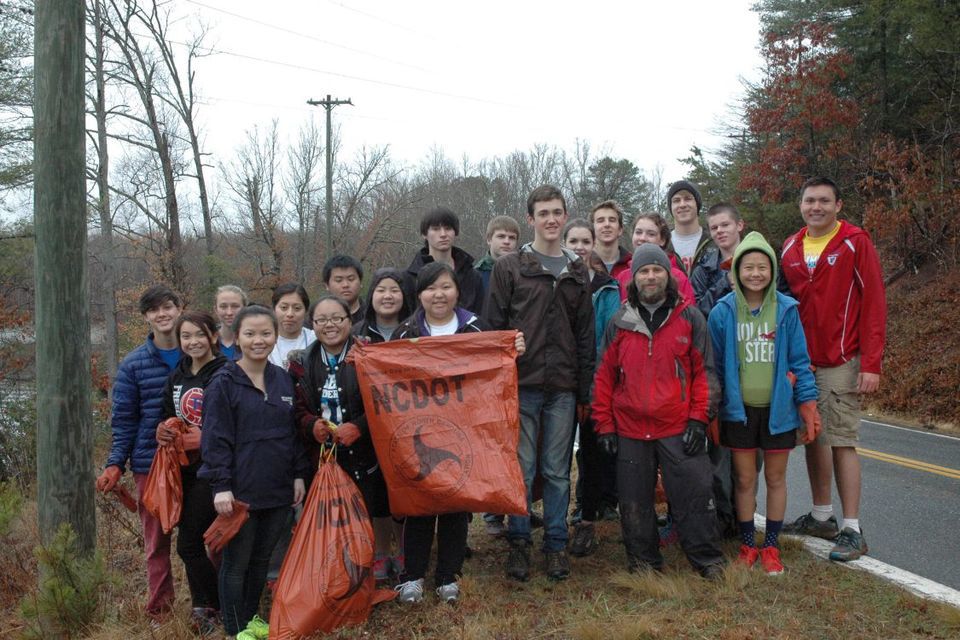 Keith Smith, an environmental science teacher from Freedom High School (front, second from right), is pictured with his students during a previous cleanup.

Volunteers retrieve a large piece of Styrofoam from Lake James during a previous cleanup.

Pictured in the foreground is a pile of tires collected from Lake James and the surrounding area during a previous cleanup.

Keith Smith, an environmental science teacher from Freedom High School (front, second from right), is pictured with his students during a previous cleanup.

Volunteers retrieve a large piece of Styrofoam from Lake James during a previous cleanup.

Some local organizations are teaming up for another monumental cleanup of Lake James and the surrounding area.

The annual Lake James Cleanup will take place from 9 a.m. to 2 p.m. on Saturday, March 23, starting in the Paddy’s Creek Area of Lake James State Park.

“What we’re trying to do is promote good stewardship of our lake, but more importantly, trying to promote this as an area for tourism,” Stiene said.

He said volunteers, which number more than 200 each year, recovered 10 tons of trash and 165 tires during last year’s cleanup. The event has expanded over the years to include the secondary roads around the lake, in addition to the lake, islands and shore line. The North Carolina Department of Transportation does not have the resources to clean the secondary roads, where Stiene said a tremendous amount of trash being dumped, including a pile of 110 tires recently discarded on an embankment off North Powerhouse Road.

“What we’re seeing a lot of is people discarding trash – backing up a truck or a trailer and throwing trash off the side of the roads,” Stiene said. “We’re talking about black plastic bags thrown out of people’s vehicles onto the side of the road. And when the animals get into it, then the stuff runs down into the lake. People are taking advantage, because they believe that the North Carolina DOT will clean the roads, when, in fact, they do not have the manpower.

“One of the things that attract people to Burke County is our lake and the surroundings. What’s the sense of coming up to this beautiful lake and seeing all of our secondary roads littered with trash?”

He said visitors to the islands in the lake also leave a large amount of trash, so much that the Lake James Area Wildlife and Nature Society has created an “Adopt an Island” program, similar to the “Adopt a Highway” cleanup program.

“People may picnic on that island, play volleyball on the beach and enjoy themselves, but they’re leaving their trash behind,” Stiene said. “They bag it up, but they leave it. People are changing their kids’ diapers and throwing them in the lake or leaving the diapers piled up on the island. Diapers don’t disintegrate. We take it upon ourselves to clean these islands up.”

He said they’ve pulled cars, trucks, boats and even an outhouse out of Lake James over the years.

Another problem is large sections of docks that have broken away and are floating in the lake. Stiene said Lake James Dock Builders (Lake James Outdoors), under the direction of owner Jason Allison and employee Nick Parker, is instrumental in retrieving stray docks from the lake during cleanup events.

“Nick and another person go out on a flat-bottomed boat used for the building of docks and moving of material,” Stiene said. “You look at an old Styrofoam dock that’s floating. Once that Styrofoam gets wet, you need a crane to pick it up. It is tremendously heavy. Nick will retrieve it and bring it over.”

Those who volunteer for the cleanup will be provided with gloves, trash bags and mechanical grabbers from the North Carolina Department of Transportation, and also water. Lunch from a variety of local restaurants will be served at 2 p.m. Stiene said they also will have a hot dog machine set up serving hot dogs.

Students that volunteer will receive a letter documenting their community service that they can use in applying to colleges.

Stiene gave a special thanks to Keith Smith, an environmental science teacher from Freedom High School, who brings his students to the cleanup every year.

“Without Keith and Freedom High School, there is no cleanup,” Stiene said. “I can’t say that enough. Every year, Keith is a pillar I can count on. He comes with 75-100 students from Freedom. Every year, we call upon him, and every year, he’s there.”

Those who volunteer should dress appropriately for the weather and wear closed-toe shoes.

The event draws support from several community partners each year. Republic provides three 40-yard dumpsters for volunteers to dump trash into. Stiene said they had so much trash last year they had to request a fourth dumpster. James Cook from Linville Rivers Campground will operate a front-loader, along with staff from Lake James State Park, to deposit trash in the dumpsters.

The Burke County Sheriff’s Department will operate a patrol boat on the lake. Burke County EMS personnel will be onsite in case of accidents. Duke Energy, the Rostan Foundation and the Charlotte chapter of the North Carolina Wildlife Federation have donated funds to help with expenses.

Those interested in participating in the cleanup are invited to attend an informational meeting at 7 p.m. on Tuesday, March 12, at St. Paul’s Episcopal Church in Morganton.

“We’ve got representatives coming to speak about water quality on the lake,” Stiene said. “I will be speaking about the cleanup. We’ve got others speaking about a very invasive plant that has now taken hold of Lake James called the Yellow Floating Heart. There’s a lot going on up here at the lake.”

He encouraged people to participate in the cleanup.

“If you enjoy this lake, whether you’re a fisherman, a person coming up here to enjoy the beautiful state park, a person who enjoys the outdoors or driving through and looking at the scenery, we ask that you come out and help protect this vital part of our natural resources and keep it pristine for others to use as time goes on,” Stiene said.

Staff writer Tammie Gercken can be reached at tgercken@morganton.com.