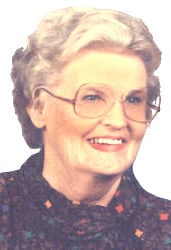 November 5, 1924 - March 22, 2020 Violet Sylvia Carlson, 95, passed away Sunday, March 22, 2020. Born in Hibbing, Minn.., she was the daughter of the late Joel and Selma Bumala. "Vi" spent her career as an administrative assistant for several large insurance companies and law firms. Upon retirement, she and her husband relocated to Morganton, where she resided for 28 years. An avid golfer, she started the first women's golf league in both Soo, Mich., and Green Bay, Wis., and was league champion at both clubs. "Vi" came from a family of artists, and many of her paintings graced her home. "Vi" was a lifelong Lutheran and a faithful member of Calvary Lutheran Church. She was passionate about her family, faith, golf, and the Green Bay Packers. She is survived by her daughter, Barbara Schneider (Alan) of Morganton; son, Tom Carlson (Patricia) of Fremont, Calif.; and grandchildren, David Charles and Karen Joyce, both of Fremont. In addition to her parents, she was preceded in death by her beloved husband, Charles; and her eight siblings. The family would like to thank the staff of Grace Heights for the wonderful care and compassion she received and the love they extended to her family. There will be no services at this time. The family asks that memorials be considered for Calvary Lutheran Church or Hospice of Burke County. Sossoman Funeral Home and Crematory Center is assisting the family with the arrangements. Condolences may be sent to the family by visiting www.sossomanfh.com. Sossoman Funeral Home

January 2, 1941 - March 21, 2020 George Donald Satterwhite, 79, of Morganton, passed away Saturday, March 21, 2020. George drove a truck until his retirement and then worked part-time for Griffin Security. Sossoman Funeral Home is assisting the family.