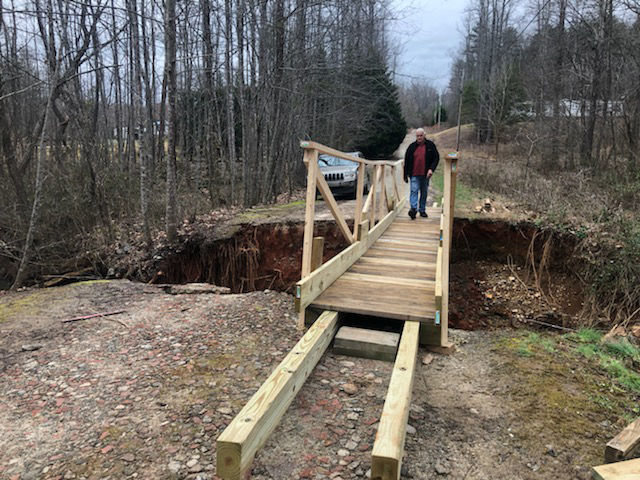 Allen Hicks walks across the temporary foot bridge that was built after a culvert on his road was washed away during flash flooding Thursday. 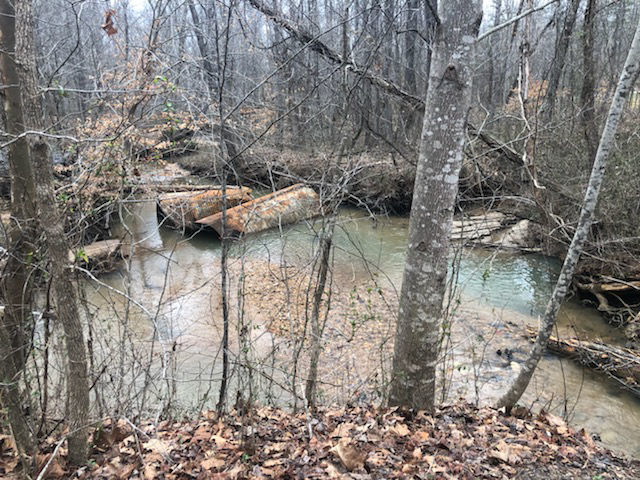 The remnants of the culvert didn't make it too far down stream after getting washed away Thursday. 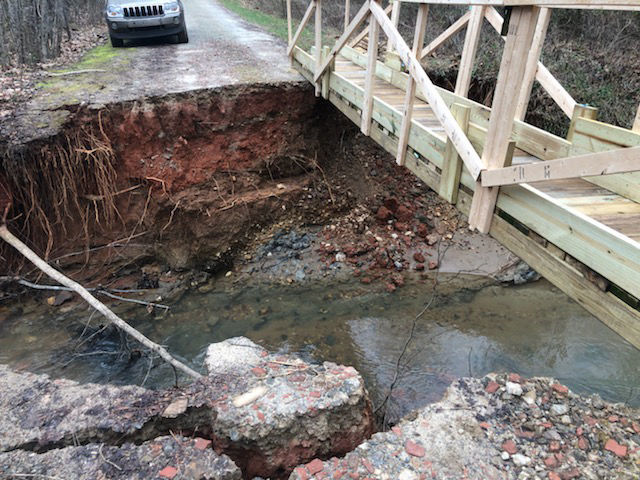 Hicks and his wife, Peggy, are worried that additional rains throughout the week might cause even more of the road to deteriorate.

Allen Hicks walks across the temporary foot bridge that was built after a culvert on his road was washed away during flash flooding Thursday.

The remnants of the culvert didn't make it too far down stream after getting washed away Thursday.

Hicks and his wife, Peggy, are worried that additional rains throughout the week might cause even more of the road to deteriorate.

While students were being dismissed early Thursday in hopes of getting them home before severe weather could wreak too much havoc, it was too little too late for Peggy Hicks.

She was heading out to pick up her grandchildren at around 12:30 p.m. when she ran into a roadblock. She said heavy rains had washed out a culvert that had been in place on Nuckolls Drive for at least 20 years.

With no other ways in or out of the road, the culvert left a chasm about 35 feet wide and 40 feet long separating the families who live on the private road from accessing the outside world.

It’s not the first time that culvert has seen large amounts of water.

“That culvert’s been in there and we know it’s been covered once,” said Peggy’s husband, Allen Hicks.

A temporary fix has been put in place in the form of a footbridge, but with rain in the forecast throughout the week, the Hickses are nervous that more of the road might cave in with rushing water hitting it again.

“With all this rain, I’m afraid that bridge ain’t going to hold,” Peggy said. “The sides of the bank are cracking already.”

They said they’ve reached out to the county and state to see if they would help with replacing the culvert or building a bridge, but were told that since it’s a private road, their hands are tied.

The News Herald confirmed with Fire Marshal and Emergency Management Director Mike Willis that was true.

He said that while the county declared a state of emergency Thursday, state officials told him Burke County did not suffer enough damage to meet the threshold for assistance.

Willis said all the damage in the county from severe weather Thursday still had been reported to the state in case they were able to find any grants or loan programs to help with damage to private properties.

As far as having the N.C. Department of Transportation paying for the road goes, if the road is private, state taxpayers don’t have any responsibility for it, said David Uchiyama, public information officer for NCDOT.

“Because the road is private, that means it was built by those owners; it is up to those owners to maintain, repair, fix, improve or whatever they want to do with it,” Uchiyama said. “State taxpayers have zero responsibility to take care of private roads.”

But for the Hicks, they still are wondering how they’ll be footing the bill for a new culvert or bridge to make it to and from their homes.

For now, they’ve borrowed a friend’s truck and left it parked on the other side of the washed out road. They drive their own vehicle to the washed out portion of the road, cross the foot bridge and get in the borrowed truck anytime they have to go somewhere.

Peggy said she wasn’t sure how long they would be able to keep that truck though. She said she keeps her grandchildren two times per week, plus has to cook meals for her 91-year-old mother and 87-year-old aunt in Black Mountain.

Allen, a Vietnam veteran, has to make it to regular appointments at the VA Hospital.

“I have to get out to go to the VA a lot,” Allen said. “The VA, they have no means of assisting, but when they tell you be here at a certain time, they expect you to be there.”

But its not just the Hicks feeling the impact of the road getting washed away.

“There’s three families stuck on that side,” Peggy said.

The Hicks said that in their current situation, they wouldn’t be able to get help from emergency services if they needed it.

“We pay property taxes to Burke, and that’s supposed to give us fire protection and emergency medical service,” Allen said. “Right now, if I dropped dead, they’d have to carry me down on a stretcher across the foot bridge.”

Peggy said the road getting washed out has left her feeling helpless.

“It makes me feel like I want to go to another county where they’ve got some assistance and get off a private road,” Allen said.

You need to start you a GoFundMe page, never can tell it may help especially if you get WBTV to broadcast your plight! The way Burke County is you won’t get anything unless you tell citizens dogs are falling into the “hole” getting hurt. That way you get enough to fix the washout & pave the whole road!