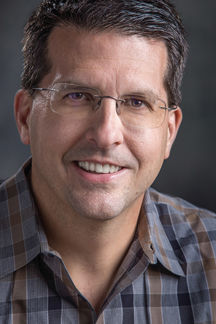 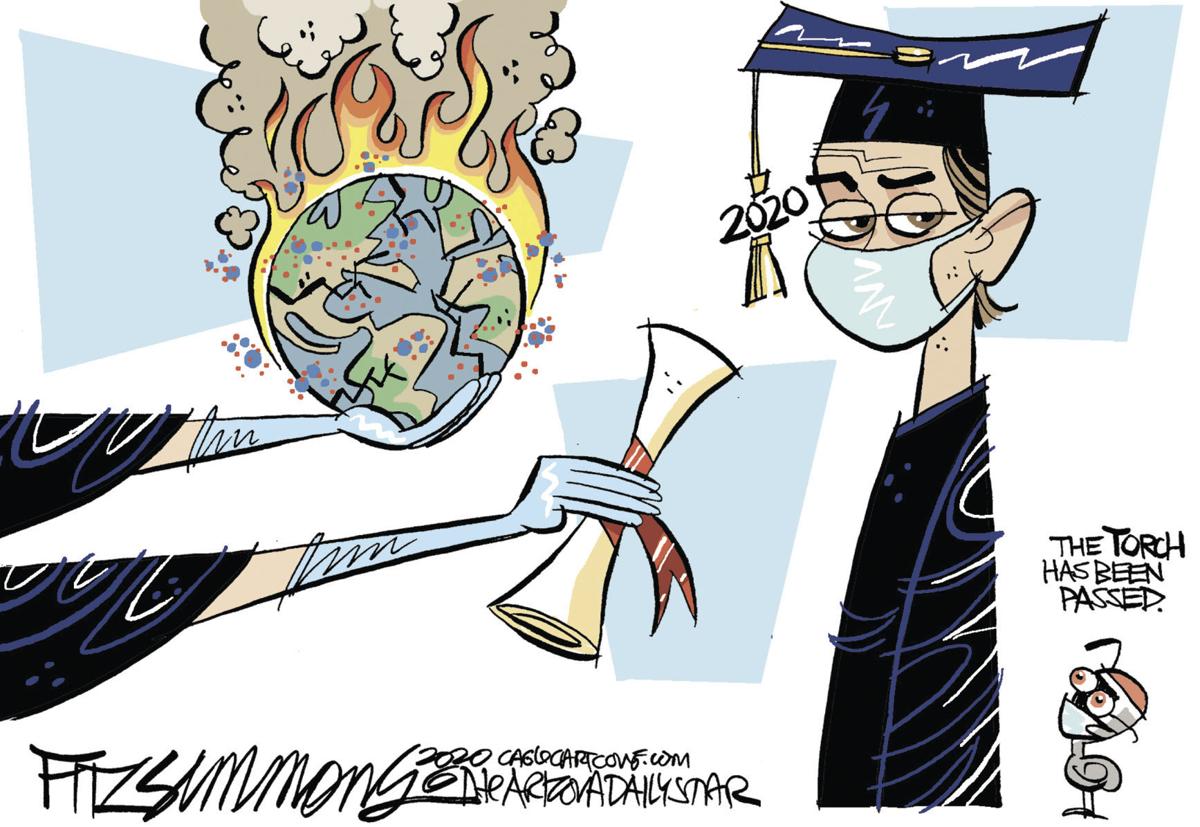 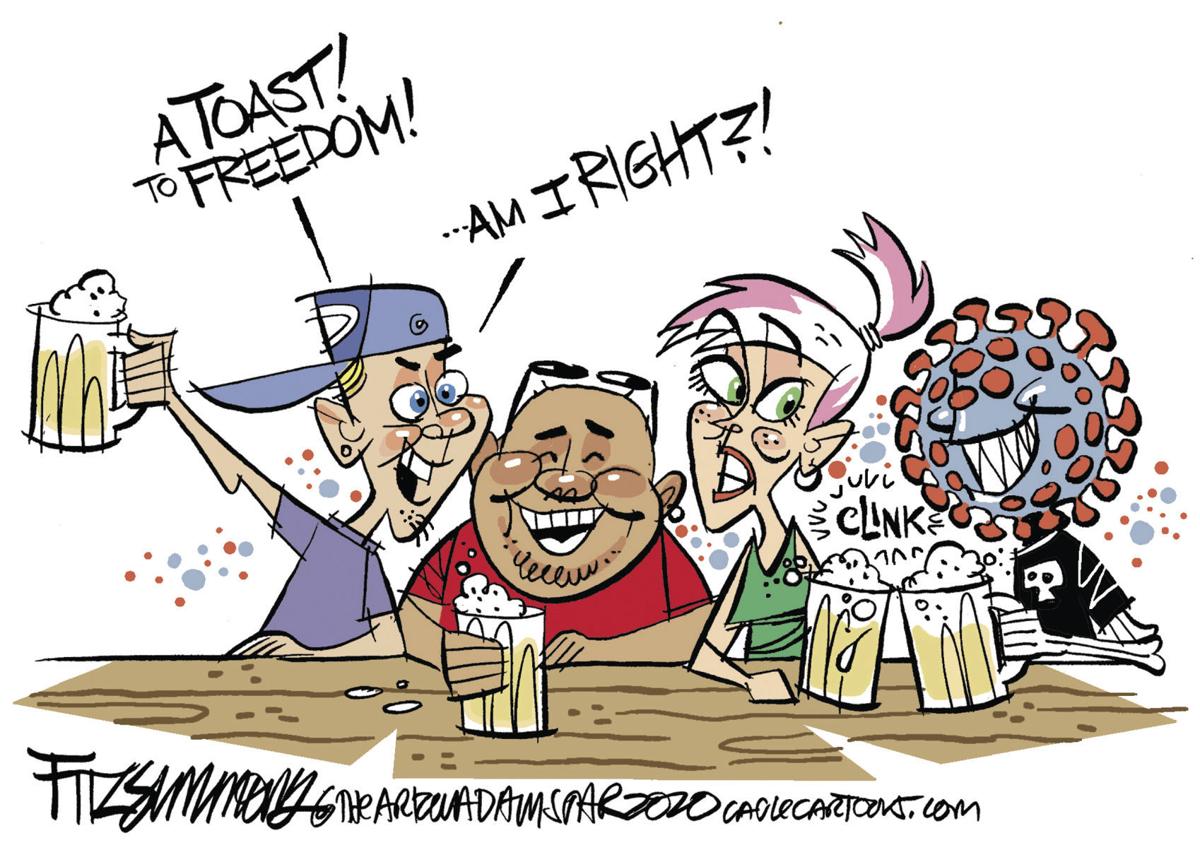 It’s high time Americans accept a first-world side effect of the COVID-19 pandemic, and I don’t mean those blasted directional floor stickers I can’t navigate in the aisles at Walmart. No, I’m referring to male-pattern corona hair.

At the risk of sounding like a narrow-minded, shortsighted, male chauvinist invasive feral swine, the closure of hair salons during the COVID-19 pandemic has been a source of anxiety mainly for the fairer sex. (Dang! There I go again!) But for men with profuse scalp shrubbery like mine, the angst has been every bit as severe.

Unlike the barren belfries of my fellow kind-of-getting-oldish dudes whose follicles have long since been liberated, my melon is still at maximum occupancy.

But rather than following the example of Brad Pitt’s or Keanu Reeves’ studular locks, my dome loaf refuses to grow in a stylish downward trajectory. Instead, it’s as if my hair is constantly turned on — and refuses to be cool about it. Not only that, but it expands at a rate that makes my friends suspect I’m on a Rogaine IV drip.

Normally, I discipline my unruly shag by visiting the salon for a good hedge trimming once every two weeks. But I haven’t had my hair “did” since Dr. Fauci and the Curve Flatteners started rockin’ the house. So now I basically have a rabid wolverine sheltering in place on my skull. And no amount of Consort Extra Hold spray can tame this savage beast.

Some of you might be wondering why I haven’t asked my wife or one of my three daughters to get out the pruning shears and give me a homemade hack job.

But based on my behavior for the past 30 years, I’m reluctant to invite any of them to wield a sharp-edged instrument within the vicinity of my face and neck.

There’s also the option of just shaving it all off, but my baldscape would probably resemble the rugged lunar surface due to an unfortunate physical altercation I had with my big brother over the TV remote when I was in high school — while he was wearing his unnecessarily massive class ring. (That’s what I blame it on, anyway — to make him feel guilty — which he doesn’t.)

Besides, my untamed pelt has kind of grown on me — literally. Sure, it doesn’t flow gracefully in the breeze like soft corn silk, but I’ve gotten used to the way it undulates atop my coconut like a luscious meringue when I walk.

Because my hair has developed a personality of its own, I’ve decided to call it Hank. I’m not sure why. It just seems like a Hank.

You may have heard that in my home state of Texas, the governor has allowed salons and barbershops to re-open in an attempt to make his constituents look less like a huge tribe of Wookies.

My own stylist, however, is waiting a bit longer before she resumes taking appointments. She told me she needs more time to evaluate the COVID-19 situation in our area, but I think she’s just afraid to face Hank.

And I don’t blame her. Hank can be a little scary until you get used to him. Recently, Hank woke me up in the middle of the night, startling me out of my sleep as he explored my ear canals.

In my hazy dream state, I was afraid there might have been a colony of murder hornets nesting in my aural cavities, but then I realized it was just Hank. And I felt oddly comforted — like an old friend was tickling my lobules. (Weird-I know.)

So for now, I’ll try to enjoy the time I have left with Hank, watching him grow up — and out. Who knows? Maybe I’ll keep Hank, or at least a version of him. But probably not. My head is hot and heavy. My neck hurts.

At some point, I’ll have to give Hank his freedom. He is a wild animal, after all. (At least he looks, acts and sometimes smells like one.)

Until then, I’ll give Hank the same words of encouragement I’ll give you.

“We’re all in this together!”

Jase Graves is an award-winning humor columnist from East Texas. His columns have been featured in Texas Escapes magazine, The Shreveport Times, The Longview News Journal, and The Kilgore News Herald. Contact Graves at susanjase@sbcglobal.net.