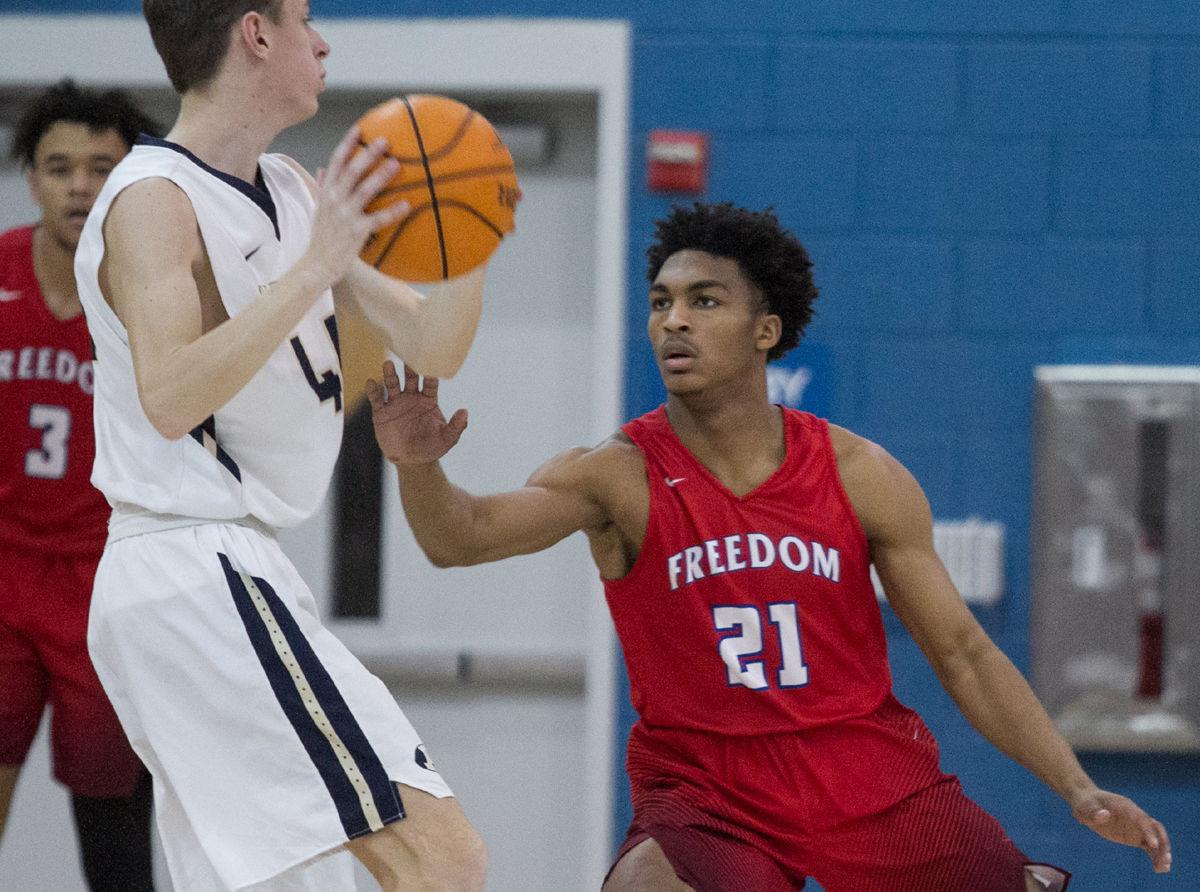 Freedom's Nick Johnson (21) guards an Alexander Central player during Friday's 83-65 road victory in Taylorsville. The Patriots wrapped up at least a shared conference title and claimed the NWC's No. 1 3A state playoff bid with the win. 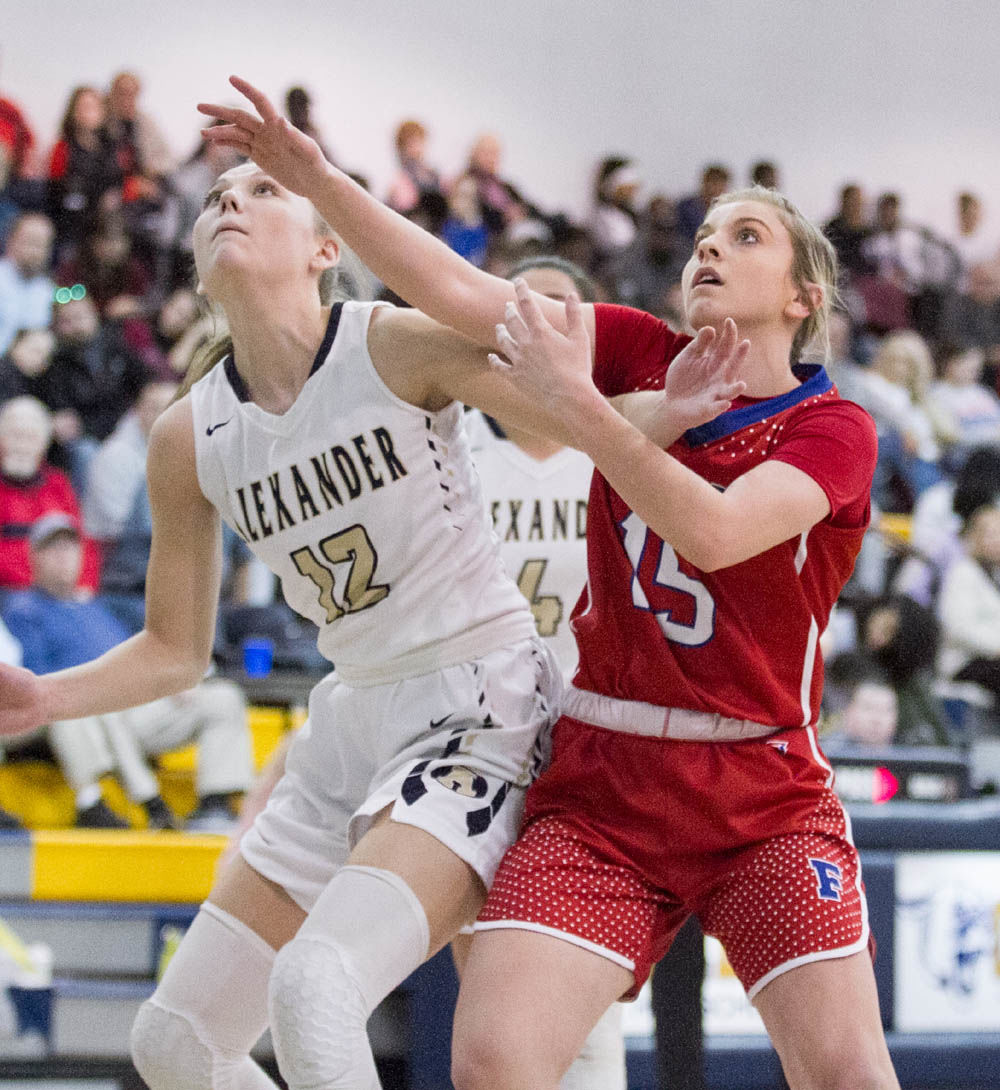 Freedom's Josie Hise (right) battles with an Alexander Central player for position under the goal on Friday.

TAYLORSVILLE — The Freedom boys basketball team became impossible to keep up with Friday night , shooting its way to an 83-65 victory at Alexander Central in front of a packed house in Northwestern 3A/4A Conference action.

Three nights after tying a career-high with 36 points, Patriots senior guard Bradley Davis lit up the scoreboard for 28 to go with eight rebounds, shooting 11 of 19 from the field including 6 of 11 from 3-point range. Classmate James Freeman joined Davis in double figures with 21 points to go with a game-high nine assists and made 3 of 5 long-range attempts.

Second-ranked Freedom (20-1, 9-1 NWC) made 15 treys in all as it clinched at least a share of a second straight regular-season title plus the NWC’s No. 1 3A state playoff seed on the same night it reached 20 wins for a ninth time in 10 seasons.

“We don’t want to look at the end of the season yet,” Pats first-year coach Clint Zimmerman said. “That will take care of itself. We got to keep chipping away and try to get better. Clinching and having a shot is good, but we have to make sure we don’t get complacent with that and we come in ready to go on Monday, Tuesday and Friday.”

The Patriots were certainly ready to go Friday, starting off on fire with four out of five first-quarter baskets coming from long range en route to an early 14-10 lead.

Alexander managed to keep the contest tight in the second quarter, going into the half down just 33-28 after Freedom led by as much as 11 at one point.

Freedom’s offense exploded in the third. Davis scored 18 of his 28 points in the period, helping the Patriots go off for 30 to finally put some distance between themselves and the hosts. Freeman scored 15 after halftime as Freedom never took its foot off the gas, playing with intensity until the final minute and grabbing the victory by a healthy margin.

Zimmerman talked afterward of his team’s willingness to play every possession as if the game is on the line, no matter the score.

“That’s something Coach (Casey) Rogers started with this group a long time ago,” he said. “It’s all about having great habits, and habits transcend what the scoreboard is. Habits go beyond the kind of play, it’s just doing your job all the time, and we’re trying to continue that.”

The Patriots will look to wrap up the title in outright fashion Tuesday at home against Watauga.

The Lady Patriots rode a stifling defensive effort to guarantee at least a share of a fifth straight NWC regular-season title Friday night, matching their second best start in program history (by the 2000-01 team) one game after sewing up a 12th consecutive 20-win campaign.

“I think to turn up the pressure and get some unforced errors, that helped us,” Freedom coach Amber Reddick said. “In the second half, we did a better job rebounding the ball. That’s something we talked about. Alexander has a lot of size and we knew we had to do a better job rebounding. We (also) cleaned up our defense in the second half and kept them off the free throw line.”

Freedom won each period, never trailing after the opening minute and leading 17-10 after one and 40-25 at the half.

Reddick said she’d appreciate what Friday meant for at least a moment before moving on to the next goal.

Freedom looks to extend a 38-game win streak on Tuesday vs. Watauga, the last NWC team to hand FHS a loss in January 2018 in Morganton. The Lady Pats have taken six straight from the Pioneers since, four of those by single digits. Freedom has only won by single digits twice this season.

Corey Carroll can be reached at sports@morganton.com.