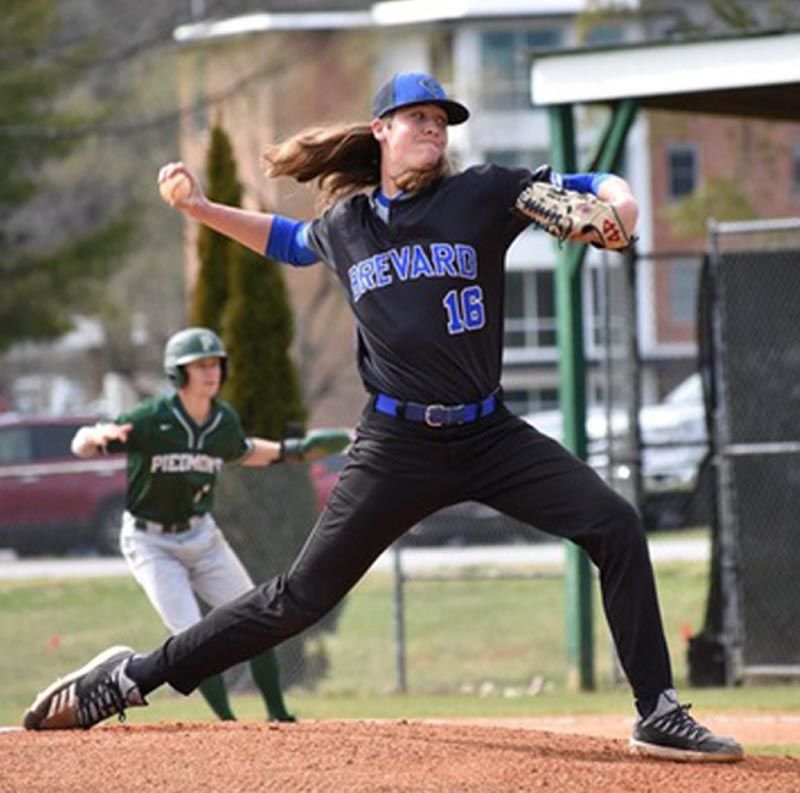 Kross Robinson, a Patton High graduate, pitches in a game for Brevard College.

EDITOR’S NOTE: The following story is part of Brevard College’s tri-weekly “#ThankYouSeniors” series, highlighting Tornados’ senior student-athletes amidst the coronavirus pandemic, which led to the cancellation of all 2020 NCAA spring athletics.

BREVARD — Senior Kross Robinson, a four-year member of the Brevard College baseball team who previously pitched at Patton High School, recently earned his undergraduate degree from Brevard in Criminal Justice with a minor in Pre-Law.

"I plan to continue my baseball career and work towards creating an opportunity to continue playing baseball following my career at Brevard with the endless help of Coach (Mike) Victory, Coach (Rob) Julian and Coach (Steve) Hucke," Robinson said prior to his graduation.

Robinson will attend UNC-Greensboro starting in the fall to pursue his master's degree in Applied Arts and Sciences with a Business focus, while further continuing his collegiate baseball career as a graduate transfer with the Spartans.

The right-hander will also compete for a second straight year in the Coastal Plains League — a collegiate summer league based in the Southeast — competing with the Wilmington Sharks during the 2020 season set to begin on July 1.

Robinson put together a masterful career on the mound for the Tornados. Over his four years, he struck out 134 batters in 125 innings pitched, maintaining a 9.65 strikeouts-per-nine innings average. Robinson made 41 appearances in total, starting in 23 contests total.

Robinson enjoyed a breakout junior campaign that saw him fan 60 batters in 54 2/3 innings pitched for a 9.88 Ks per 9 innings rate. That led to Robinson garnering an All-USA South Conference third-team honor, a first for the Tornados as a member of the conference.

The Morganton native turned in a dominant, career-high 10-strikeout performance against nationally-ranked Huntingdon College at Gil Coan Field on March 17, 2019, in seven innings of shutout ball. Robinson put together another dominant, 10-strikeout outing in a victory over Covenant College on April 13 of last year.

Last summer with the CPL’s Edenton Steamers, Robinson appeared in 12 games, including one start, and earned a pair of victories while striking out 40 batters in just 26 innings. His first victory of the summer campaign came on July 12 at the Peninsula Pilots, where the right-hander tossed 4 2/3 innings of two-hit, one-run ball in relief, striking out six.

Robinson fanned a season-best nine in a five-inning home appearance vs. Peninsula and logged his second win of the season at the Wilson Tobs on July 30, fanning six batters 2 2/3 innings of work.

Off the field at Brevard, Robinson was a member of Alpha Phi Sigma, and academically made the Dean's List each semester at BC.

"My favorite memory at Brevard was being a part of the culture change that the new coaching staff brought to us this year (2020)," Robinson said. "They reminded us how fun baseball can be and the importance of having grit.

"I can't thank the coaches enough for what they have done and will continue to do for this program and my personal career. I'm proud to say I was there to see the beginning of a new age of Brevard College baseball.”